Interview conducted in 2015 by Ivy Miller.

Local Couple Follows Their Passion of Fighting Hunger Within Community

How many years has it been since you started volunteering with FDN?

Gary: Five. We started off just picking up food for the pantry for Reach Out for Christ Church (in Freeville, NY). Picking up food from the church every other Sunday introduced us to FDN. And we just got more excited about it. There was food that was going to be thrown away that could still be eaten and we could get it to the people who needed food.

Pat Vincent, a member of FDN, then asked if anybody had a pick up truck and would be willing to come down and take food donations up to the church on Sunday mornings, and I couldn’t think of a good reason not to, it sounded like there were more good reasons to. We did that for a while, then Helen started coming to the church.

We really feel good we can help get food to people. Maybe they have money for food, but they don’t have money for medicine. There is such a thing as the “working poor” now. Man and wife can both have decent jobs but everything is so expensive. If we can get more food to them, that frees up more money for other necessities.

When did you first get inspired about fighting against food waste?

Helen: I was brought up this way. My parents went through the Depression. My mother was a knitter and a sewer so she was always handing out mittens and coats and hats to people in the neighborhood. My father was a cook. He’d go to Cornell, get the biggest piece of chuck roast you could find and when we had soup, the whole neighborhood had soup. He handed out to a lot of the widows in town and especially people with kids. Then I married a man who had eight kids. He was a minister and we only had $100 a week, so there wasn’t any room to waste food.

We have a lot of food that goes in and out of our house now. There’s a lady who lives next door who’s 81, who loves to cook. She cooked at Cornell for 40 years. If I get food that I’m not going to use, I give it to her. She’ll cook for us, for her family, and it gives her something to do.

Gary: Two years ago we bought a mobile home in a senior citizens’ park in Dryden, and we got to know the neighbors by asking, “Hey would you like a loaf of bread or a few apples or potatoes? We’ve got plenty.” 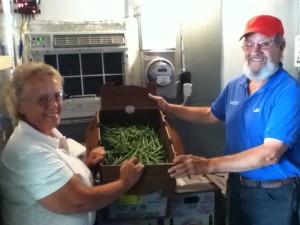 Gary, was there anything that inspired you to start your passion for rescuing food?

Gary: My father worked at Cornell and had a farm. He also worked as a plumber and steamfitter. I remember him saying he only made $86 a month. And after a year or two, they found it necessary to roll him back to $78 a month. My parents had four kids at that time, so a lot of our food came from the farm. Preserving food is just what you did back then.

It’s a shame to know that most communities don’t preserve food.

Gary: It’s a great thing that Wegmans is doing. They put food out on their loading dock to go to food pantries and to people who aren’t fortunate enough to have a lot of food, and 1000-2000 pounds of food is picked up daily. It’s up to 17 pantries now (and more than 30 programs served through FDN) . I feel that it’s my reasonable duty to help get that around.

A lot of people here don’t realize that there are people down the street that don’t have the resources to get what they need.

Helen: Sometimes we’ll load up the truck with food and go around the neighborhood asking families if they need anything. We realize that there is food to be had, all you have to do is ask. There’re a lot of places throwing food out into the dumpster because nobody has asked. They don’t know what else to do with [the food].

So I’ve been wondering, and you’ve already briefly mentioned it, but how did the two of you meet?

Helen: My husband had died and, of course, Gary’s wife had died. I was coming down on Sunday to church with my sister and they were going to Cornell, picking up cans and bottles to collect money for donation funds. I just got into it. So we got into the same bottles and cans mission.

I love that you two met through the same passion that you share today.

Helen: Our life really is bound around the food.

Gary: The more we get into the food, the more alive we become. When Meaghan [Sheehan Rosen, FDN coordinator] calls, we can’t get there quick enough.

Tell me more about your mission work in Haiti.

We travel to Haiti usually twice each year for two weeks at a time.We take items of need for school. Most often clothes for the kids. Candy. In the Spring we have a church convention. In the Fall we hold a medical clinic. Always we raise funds for food for the kids.There are 150 kids in the orphanage.Gary and I know there is a need around the world including the USA for food. Haiti being the poorest in the Western Hemisphere they suffer all for the lack of food.

So reducing food waste and helping fight hunger in the community seem to be a driving force for you both. Is there anything else in your free time that you like to do?

Helen: Nothing else really, it takes up most of our time. We help with a mobile food pantry, the Southern Tier Food Bank. It’s out of Elmira. If we have a free day, we’ll go down there. Any food that we don’t use, we give away to them.
Gary: We enjoy getting free food and getting it to people that need it. And I don’t know if there’s any plainer way to say it. We’re very one-minded in that. 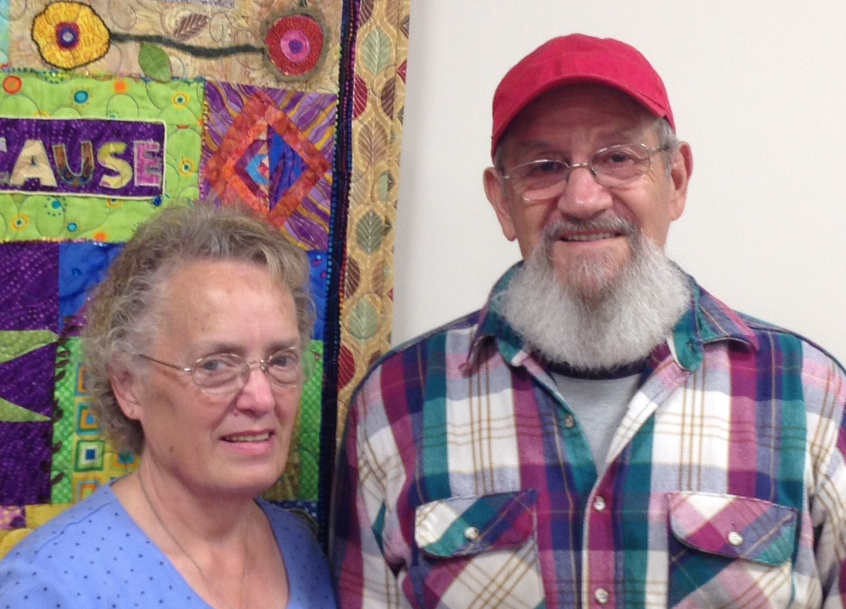