Interview conducted in 2016 by Bruce Estes.

He’s one of about 50 volunteers who donate a few hours each week to help the Friendship Donations Network get food that would be discarded get re-routed to food pantries in Tompkins and nearby counties.

Paul’s been a volunteer for so long, he can’t recall the exact year he started. “Sometime between 10 and 20 years ago, after I retired from Cornell,” Paul says.

How he got involved with FDN: About 20 years ago, he met FDN founder Sara Pines and was inspired by her determination to assure that no one should go hungry. Paul has done every chore from sweeping loading docks, picking up donations to stacking boxes. “Anything but office work, phones and databases. I had enough of that when I was working.”

Professional background: He worked as an environmental plant biology researcher at Boyce Thompson Institute from 1967 to 1996. After retiring from BTI, he worked for CSP Management, helping owner and a Cayuga Heights neighbor, Jerry Dietz, manage and maintain rental properties. Paul says his experience with Ithaca-area rental properties let him see a side of the community that he had not seen while he worked at Cornell. “I could help people. That makes me feel good.” he says.

How he got to Ithaca: He came to the U.S. from Holland in 1967 to work for Boyce Thompson when the institute was located in Yonkers. Paul got to Ithaca in 1978 when BTI relocated to the Cornell University campus.

Family: Paul is married to Wies van Leuken, who is vice chair of the Ithaca Cable Access Oversight Committee. The couple has two sons, one in Colorado, one in Ithaca and six grandchildren.

Inspiring words: “I can’t change the world, but together, with others, we can.”

Phrase he says most often in an interview: “I am lucky, and I want to share it with others.”

On volunteering: He has been a volunteer for the Red Cross of Tompkins County and Finger Lakes Land Trust. On Wednesdays, he volunteers at Loaves & Fishes in Ithaca. “Volunteer activity has always been important to me. It became more so after I retired.”

Enjoying life: Paul enjoys time with his family, working with his hands, staying active and being outdoors. Among his interests are gardening, constructing balance stone sculptures, reading. “I’m a bit of news junkie,” researching issues on the internet. His favorite books are on anthropology, cultural histories and practices. “If we understand each other, we can make a better world.” 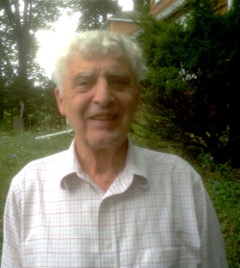