Spotlight on No Más Lágrimas – No More Tears

Note: Ana Ortiz was the 2020 Laura Holmberg Awardee from the Women’s Fund of the Community Foundation of Tompkins County. Watch the virtual celebration from 10/29/20 here.

The first thing that anyone will tell you about No Más Lágrimas is that it is a family. Their facility on 706 West Buffalo Street, which distributes fresh food, clothes, and home supplies, looks like a block party from afar. And Ana Ortiz, the head of the whole operation, serves as the mom, cool aunt, and older sister to anyone who steps within her 10-foot radius.

Ana moved to Ithaca when she was 19 years old after spending much of her life in Puerto Rico. She quickly realized that many members of the community—especially fellow Latinos—were struggling to find the resources and services to survive. “I was broke, but I had to help,” Ana told me. Soon, Ana started feeding anyone who came to her door with any ingredients she could find in her cabinet. Even though Ana herself was struggling to survive, more and more people started showing up at her doorstep. “People told me that I had a voice,” Ana told me, grinning. This voice propelled Ana into a new role as a community leader.

Nearly a decade ago, Ana and a team of volunteers founded No Más Lágrimas to provide food and services to primarily the low-income, Latino community. Although the organization continues to focus on the Latino community in Ithaca, they now serve anyone who needs help. “Everyone became equals after the pandemic,” Ana explained to me. “I was on the ground every day, almost 24 hours per day. I realized that color and income no longer mattered.” The organization now has a bilingual sign: “No Más Lágrimas, No More Tears.”

Since late summer, No Más Lágrimas has operated out of a vacant lot and building behind GreenStar’s classrooms and adjacent to the Cayuga Lake Inlet. Every Thursday, Ana and her dozens of volunteers distribute food, clothes, and diapers to anyone who stops by. During my visit to the facility, several people walked by the Food Hub on the sidewalk near the inlet. Ana cheerfully invited these passersby to grab a bag and pick out food. A few of them bashfully took Ana up on her offer, and left, grinning, with a grocery bag of fresh food and bread. Whereas other food pantries have shifted to pre-packed boxes of food, No Más Lágrimas has continued to offer customer choice-style distribution. This model for distribution reduces food waste and gives customers more freedom to choose how to eat.

The No Más Lágrimas Food Hub has grown out of Ana’s strong connection with the Friendship Donations Network (FDN). FDN volunteers rescue food from stores and markets in town and pass the food off to Ana and her team to distribute food to people in need. Although No Más Lágrimas distributes hundreds of pounds of this food out of their Food Hub each week, volunteers also deliver food to Cortland, Dryden, and even Binghamton. “We are rescuing a lot of food,” Ana told me.

During the pandemic, one of FDN’s longtime food distribution partners, Tioga County’s Halsey Valley Helping Hands, closed. This closure left a gap in the FDN food distribution schedule, which caused surplus donations from Wegmans, GreenStar, and Tops on Thursdays. No Más Lágrimas quickly volunteered to fill the gap, and now picks up food from FDN and distributes it at their weekly food hub.

Ana refers to FDN’s coordinator, Meaghan Sheehan Rosen, as a sister. But FDN and No Más Lágrimas as organizations have also started to become like a family. “We rely on each other,” Ana explained to me, with a big smile on her face. When No Más Lágrimas has surplus, FDN volunteers find people in the community who can take it. “Even after the pandemic, we’re going to work as a team. Meaghan and I are going to exchange our organization t-shirts. Our family is going to be official!” Ana said.

When I visited the No Más Lágrimas Food Hub in early October, Ana greeted me like an old friend. “Hey, man!!! Come get some food!” she called out to me. At that point, I had met Ana only on Zoom, and I arrived at her facility wearing a mask. When I told her that it was me—the interviewer for the FDN article—she yelled to her fellow volunteers with delight and restrained herself from giving me a big hug. As I observed Ana handing out snacks and juice boxes to the kids accompanying their parents to the Food Hub, I realized that these interactions filled with love and kindness characterize the No Más Lágrimas family.

After seeing how No Más Lágrimas has touched people’s lives, it can be difficult to believe that Ana and her volunteers don’t get paid. In fact, when people ask if Ana needs money, she often tells them to go buy supplies—pencils and notebooks for kids and diapers for families—instead of giving the money to her. “I don’t care if I get paid or not. We all need each other, because if we shut down again, I don’t know how we’re going to survive,” Ana told me.

Since early October, No Más Lágrimas has been running a fundraiser to support their operations during the wintertime. Ana and her team are planning to move most of their distribution operations indoors, but need to restructure their facility to maintain safe social distances. The team also launched the Latino Center out of the same facility on 706 West Buffalo Street, which provides diapers and clothing to all families who need it. Volunteers hope to expand these services in the coming months.

But even if you can’t chip in a few dollars, there are plenty of ways to help. When I asked Ana how people could help in ways besides donations, Ana told me, “Take our pictures and post us on Facebook. Bring us things you don’t use. Come volunteer. We need all of that.” Then, she turned around to attend to a family that had just arrived at the Food Hub. She assembled a little bag of snacks for the children, and directed the parents to the long table of food just a few feet away.

You can donate to No Más Lágrimas on their website: https://nmlagrimas.wordpress.com/donate/. You can also donate via Venmo at @nomoretear (sic) or via PayPal at nomoretearfamilia@gmail.com (sic).To learn more about the Food Hub and other organizational services, follow the No Más Lágrimas community on Facebook @NoMoreTearsNoMasAlgrimas (sic). 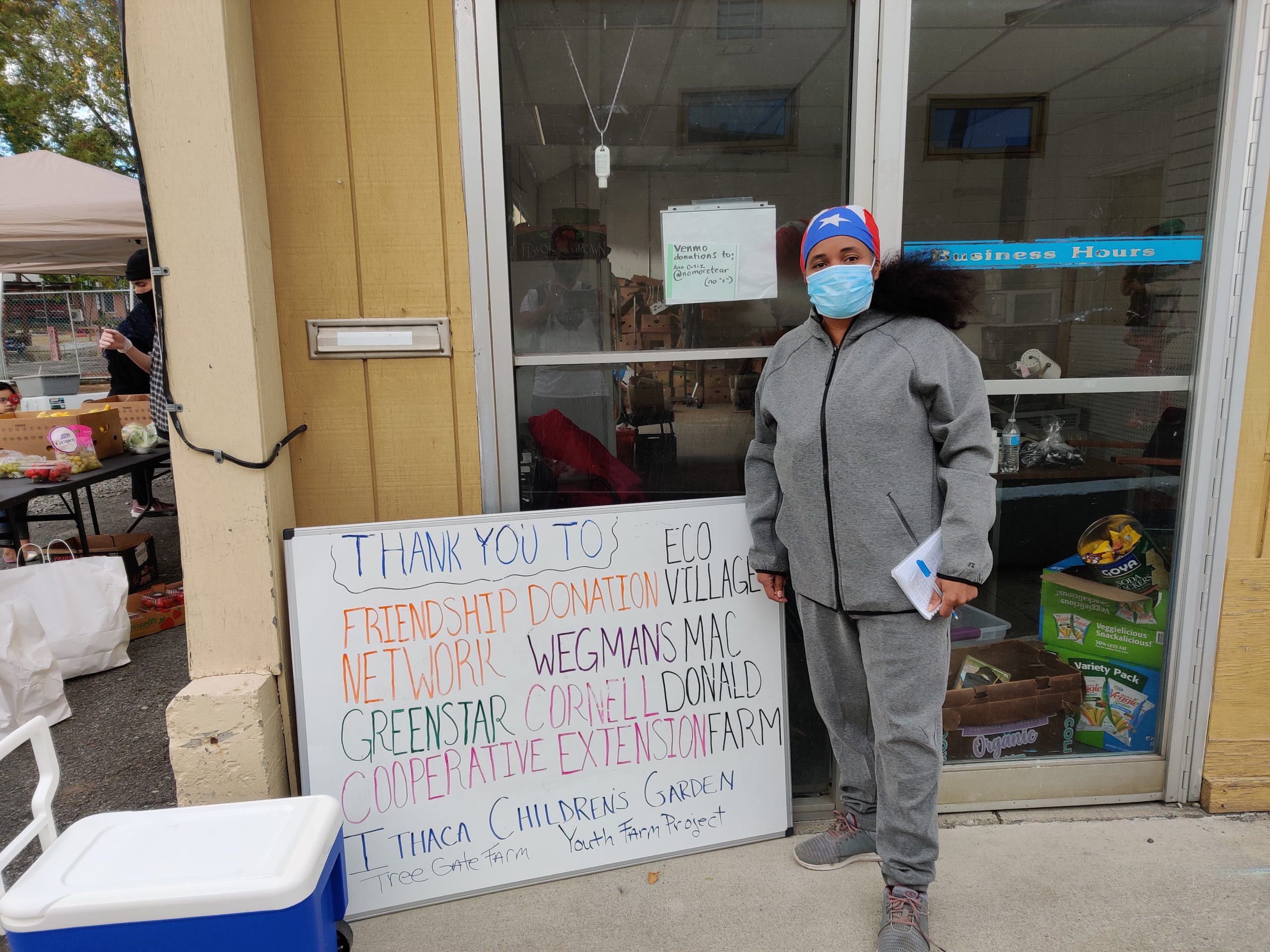